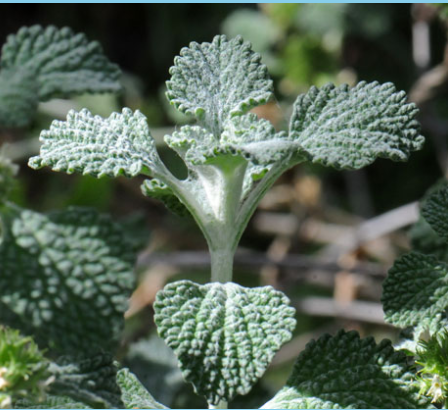 Horehound is a perennial herbaceous plant, found all over Europe and indigenous to Britain, that has been used for 2000 years as treatment for expectorant and cough.

Horehound is a bushy, producing numerous annual, quadrangular and branching stems, a foot or more in height, it leaves are covered with white, felted hairs, which give them a woolly appearance. It is widely cultivated in North and South Americas, and easily cultivated in dry, open regions under any type of soil conditions.

Horehound was traditionally used to treat chest discomfort and pain, and often made into syrup with honey or sugar.

12th century German herbal scholar, Hildegard Von Bingen (1098-1179) is a prominent figure in western herb. She was an herbal scholar, monistic leader, and first female composer, who was also talented in astrology, literatures and more, who presented horehound as ''best herb for common cold''.

In his book, 16th century British author John Gerard wrote that ''syrup made from fresh leaves and sugar is the sole treatment for cough, asthma and respiratory diseases''. In addition, Nicholas Culpepper, 17th century herbal scholar and astrologer, wrote that ''take horehound tea with honey to treat breathlessness, cough or tuberculosis/consumption and wasting diseases, and removing stubborn phlegm in the chest''.

Since it was introduced by early settlers in North America, hop was traditionally used to treat cough, common cold, tuberculosis/consumption. Since, it was used for respiratory diseases and infections, malaria, intestinal parasites, and menstrual disorders, and 19th century eclectic scholars also used it for same purposes.

Many herbalists today still use horehound for its traditional uses, to treat cough, common cold, and respiratory diseases.

According to Russian and German researches, horehound contains Marrubiin, a chemical that thins(watery) stubborn phlegm. Marrubiin is bitter and very effective in discharging phlegm, and has been used for year in European regions as various forms like syrup and lozenges. In America, its widely used to treat cough. Even conservative herbal scholar, Dr. Varro Tyler, mentions Horehound in his book, ''Honest Herbal'', as effective expectorant.

Gather in spring or summer, and dry before use

1. For cough, place 1/2-1 teaspoon of dried leaves in 1 cup of hot water for 10 minutes. Drink 3 times daily and add honey for better effect.

3. For skin use, use strong tea or crush fresh leaves

4. For constipation, use larger dosage

1. Not for use for children under 2 years old, and start with smaller dosage for elderly, and increase dosage as needed

2. Small amount of horehound is effective in treating arrhythmia but large doses can actually cause arrhythmia, so in patients with heart disorder, consult healthcare professional

If no changes occurs within 2 weeks of use, or coughing up bloody sputum, consult healthcare professional